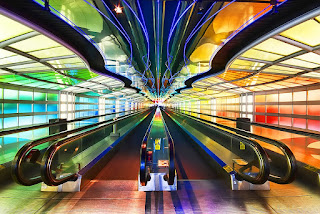 I had a dream that you were already here, and I was pushing you in a stroller, as I walked through the airport.  I don’t know if we were coming or going, but we weren’t in a rush.  And the electric walkways buzzed on around us, transporting strangers we neither saw nor heard.  I was with my ancestors, my ansisters, the women who watched over me in life and continue to watch over me since their departure from this world: Titi Ina, Tata, and others I had never met. And we were surrounded by their love. It has been weeks, perhaps months, since I had this dream, but I can still feel the strength of their embrace as they circled around us, protecting us from your father’s impending wrath, whispering “it is meant to be, it is meant to be.”

One morning, we were getting ready to go our separate ways, when he said he’d reached a conclusion: “We simply cannot have this baby.”  “What if I’ve reached a different conclusion?,” I asked.  “That’s exactly what I’m afraid of,” he replied. Who knew the man could be such a coward, such a selfish coward, such an idiot. He really believed that he could decide for me. And I didn’t realize it then, but that was the beginning of the end.

In the days to follow, he would focus all his energy  on trying to convince me that he was right and I was wrong.  “You can have a baby later, this is not the time.” No matter what I said in response, it just escalated. He said he’d talked to his friends with children, and they said “sure, it’s cool to be a dad, but I definitely could have done without it.” I took him to therapy with me, thinking somehow that would help. It just made things worse, “it’s like you’ve given me this limitless credit card, and put me in the middle of a shopping mall, and I’m looking at all the stores, and I don’t want to shop at any of them.” Finally, I told him we didn’t need him, that he could just go, and his reply cut like a knife: “you didn’t care who the father was, you just wanted to get pregnant.”

He kept trying to get me to listen to him, to understand. I don’t know why I answered the phone, why I let him see me. We went back to that little restaurant, the same one we’d broken up at years prior, before we realized we weren’t ready to let each other go.  Back then he had compared me to a star that he wasn’t able to hold. Now he begged me to have an abortion, saying “I have dreams.” I heard him out then I said, “I understand that the timing isn’t good for you, but you need to understand that I’m not like you—when someone hands me a star, I don’t just give it back.” And that’s when it broke. He glared at me, and shook his head. He said he felt like he was walking toward this light, and he was finally about to reach it, when I grabbed him by his ankles and pulled him back, and he fell to the ground, and I continued to drag him back as streams of blood from his face stained the concrete, and the light went out.